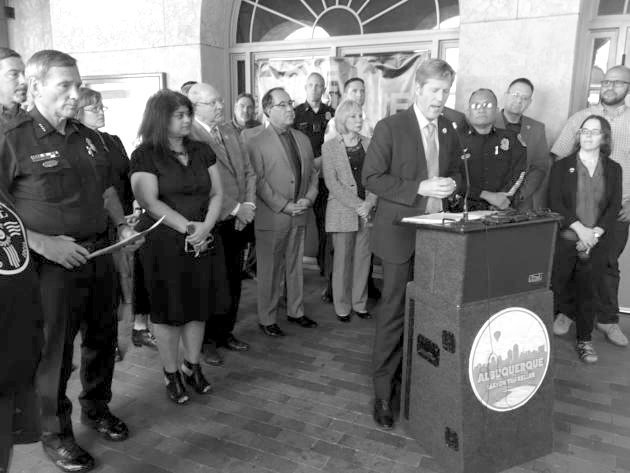 Two Way Street contributors Nick Vottero and Kharlos Panterra had an opportunity to sit down with the City of Albuquerque’s CAO, Sarita Nair, and Deputy Chief Roger Bañez to discuss the proposed Downtown Public Safety District (DPSD). Initially, our editors had some reservations about the need and design of the DPSD. There are few places in town that are as well policed as the downtown community; just visit the area on any weekend night, and you will see a substantial police presence in the area.

Additionally, most of the City departments are located in the neighborhood. For the sole reason of avoiding duplication and spreading City funds to other areas of town more frequently overlooked than the downtown area, we were unsure that the proposed DPSD was an efficient use of public dollars. Despite our initial hesitation, the discussion immediately put us at ease. The City is approaching the proposed district in a way that promotes access and equity for all populations in the community, and specifically for the populations that are regularly overlooked and underserved. The services offered and the purpose of the space itself avoid duplication, and truly promote a rapport between the City and the people in the community. We’ve transcribed part of the interview for our readers to better understand and appreciate this new city project.

Nick: Downtown is one of the places in the City least lacking in having a police presence. Why have you identified the downtown area as the place for the public safety district?

Sarita Nair: For the City, public safety isn’t just about being safe. We wanted this to be a model for interdepartmental cooperation with a geographic boundary to see how much we could do if we really work on working together. We have Solid Waste, the Block-By-Block folks, the graffiti folks, the people who clean the alleys, transit and transit security officers, police, and we have more of the fire and rescue departments working together in one place, because we see that as a way to help people feel safer without feeling threatened. As a person of color, you know, I’m never worried about the paramedics. It’s a nice way to provide that presence for the people who might not always feel safe when they see the police. We’re also bringing in all of the contractors we work with for family and community services for street outreach, substance abuse treatment, and behavioral health services so they can talk to each other and more effectively provide services for the community. We’re so accustomed to working in silos, because there is a lot of work to be done between providers and recipients, but this will let us practice working together to see how we can improve the outcomes for the community.

Kharlos: We’ve seen that crime has taken a dramatic plummet over the last several months, and we think we can attribute that to the City’s new approach to more of a community policing model. Is this a part of that initiative?

Chief Bañez: Yes. When we came in with the new administration, we found that officers were receiving a lot of support from the administration, but we still have to deal with the stigma associated with police in the community. We wanted to make sure that the force was supported and trained to be better suited to interact with people of color and people struggling with mental health. While we have been more active in dealing with crime through stops and arrests, we have also realized that arrests may not be the best way to resolve a situation. Particularly in the downtown area, where we have a lot of homeless residents, we’re trying to get them services. By having these departments together, we are able to provide more services. What happens in Albuquerque, which is in the heart of the State, what we do affects the communities around us, so we are also getting a lot of support from the State on this program as well.

Nick: This seems right in line with the City’s approach to community policing. What other kinds of coordination will be going on interdepartmentally?

Chief Bañez: We’re reaching out beyond just the City departments. The downtown area has a number of faith-based and community organizations providing services as well. The plan is to involve these organizations as well. Previously, when we would come across someone on substances, we would take them to the hospital, but there would be no follow up. Now, we can find a way to help these people after they are released from the hospital. We’re also looking for support from businesses, because we can’t do it ourselves. We’ve done something like this before out on Central and Coors. We created a coalition of business owners who can help us have more eyes on the street. When we cultivated these relationships, we saw drops in violent crime, auto theft, robberies, and property crimes. This will be a similar program, but on a larger scale.

Sarita Nair: Our relationship with business owners revolves around being responsive to their needs. With Solid Waste, for example, we have already been able to be more responsive to the needs of businesses on Central, like 516 Arts, who would be left with a mess on the street after the weekend. Now we have teams going out every Monday to address this need. It’s just one of those small things only possible through open communication between the community and the administration. Lighting is another issue. For some reason, we can’t seem to get the streetlights to work all the time, so we’re coming up with other solutions. This type of community engagement lets us be responsive to and aware of those needs.

Nick: For a lot of the underserved populations in the community, there are more pressing and immediate needs to be met. In what ways will the DPSD be an inclusive space for these population? (e.g. shelter from the elements, available restroom/ washroom facilities)

Chief Bañez: Once we develop the facility completely, there will be people trained and on the premises so that they can provide the services and resources directly. Our directive is to make sure that we are available and accessible for anyone. It will be a place to go to get back on your feet.

Sarita Nair: In the City Administration, we are just now discussing the Mayor’s vision for working with people who are experiencing homelessness. The number one thing that we have consensus on is that there is not a single place with a low bar of entry where people can go to get out of the elements, have access to basic medical care, and get additional services. It will take time to site and build, but in the meantime, we are opening the Westside Shelter 24/7, seven days a week, all year. There will be more frequent transport, and you will not get kicked out in the morning, like you are now. It’s one of the first places we toured when we came into office, and people were living there, even though they could not stay throughout the day. There were bedspreads, things on the wall, family units were family homes. We needed to acknowledge that reality and keep it open all the time. It will be more expensive, with the additional transport and we need on-site medical care. Our response times from Station 14 out there where too slow. That is our plan for the next two years, because we need to build a new facility closer to the center of town, where our residents will have more immediate access to services. It’ll be a huge lift. We’ll need to pull a whole bunch of capital that would ordinarily go to discretionary projects and district improvements, but we’re going to ask everyone to get onboard with this project. It’s the only way we’re going to take a chunk out of this. The other piece is that we need a crisis triage center, where people can go for behavioral and mental health, substance abuse, or just general counseling, if you’re having a terrible day and you have no support network. The County seems like they want to take the lead on that. We need to start small. One of the things they’re talking about is having medical supervision at MATS Detox. Right now, we never take people to MATS because the bar to entry is so high. If you have a blood pressure over 120 or so, you can’t get in. A bad text will send me over that threshold. You also can’t get in if you’re clean or if you’re wounded. The County is really working on that. So, I think if we get both of those, a campus to provide emergency housing with services with an exit strategy, like access to housing vouchers and a way for people to progress through the system, and the crisis triage center, we can make some progress on outcomes for people who need these resources.

Kharlos: Tell us more about the public washrooms and facilities. Other cities have experimented with public facilities, usually monitored by an attendant or monitored by police, to have available downtown?

Sarita Nair: Our administration is all about experimentation. Our first public bathroom experiment did not go great. We put portable toilets in Coronado Park, because that’s where we need them. Very quickly it got to the point where we needed hazmat teams to come out daily. It became expensive right away, but we learned some great lessons. They were used a lot, but we couldn’t afford it. We just bought a more permanent unit, and we have finalized some sites to place it. We’ve learned that there does need to be security. If we need that security 24/7, again it becomes a more expensive, but we’ll see what works. We’ve also found portables with showers. We need to find the right balance for what we can afford.

Kharlos: What steps are you taking to develop the police force to understand trauma and interact with people who are in crisis?

Chief Bañez: One of the biggest things we’ve done is create a Crisis Intervention Team (CIT). I was one of the first officers trained, back in the 90s, to look at an individual’s behavior, whether it is drug induced or if they’re dealing with a catastrophic event. We try to determine what is going on with them, and help us get them to advise us on the right next step. Everyone has been through the basic CIT training. We also have the Advanced CIT, and Mobile Crisis Teams with trained counselors and doctors.

Sarita Nair: That’s not to say that we do it perfectly. We’re really trying to recruit new officers who, like Chief Bañez, want to be a guardian for their communities. We don’t want to recruit officers the way our City once did, with ads running helicopter sounds in the background. It’s going to be a long process. Shifting culture takes time.