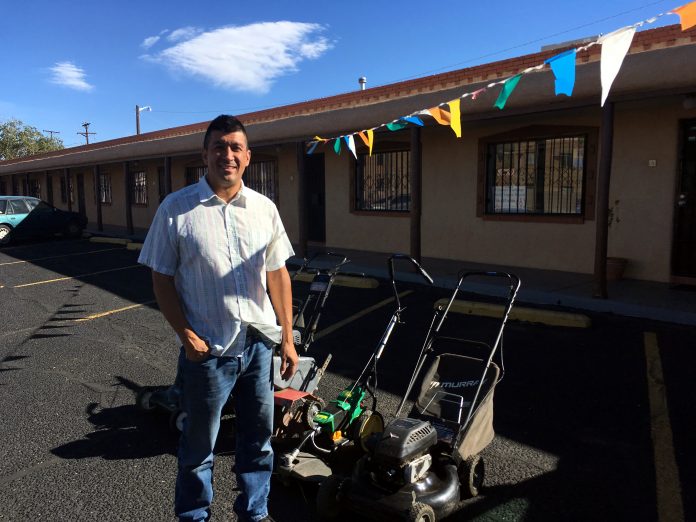 Santiago Hernandez’ career in small engine repair began in 2010 when his own lawn mower gave out. After hearing the repair would set him back nearly two hundred dollars, he got on YouTube and learned to do it himself. Soon he began driving around neighborhoods on trash days, picking up abandoned mowers to fix up and give to friends in need. After Hernandez set up a successful shop out of his garage in Denver, Sears contacted him to do their warranty repairs, which eventually led him to see an opportunity to open a shop in Albuquerque last year.

Treasure Exchange, on Zuni near Pennsylvania, has only been open since July, but Hernandez said he already feels a sense of mutual respect with his neighbors. “There’s people who live in the back who say, ‘Hey, we’re keeping an eye on your things out there,’ and I didn’t even ask them to do that. So it’s been cool.”

Hernandez says after growing up as a kid in the projects in Denver, he now hopes to have a positive impact as a business owner in Albuquerque’s International District. “I want to be a light,” said Hernandez. “I want to be a place where people trust what we do, people feel welcome, and they don’t feel looked down upon or judged because of their situation.” He wants to create a few more full-time jobs as well as offer part-time work and skills training to local youth. Starting in the spring, he plans to offer occasional low-income “Clinic Days” when people who qualify for Medicaid or food assistance can get their yard or garden equipment repaired on a discounted sliding scale.

When asked what advice he has for small-scale entrepreneurs, Hernandez said attitude is everything. “If you have a great attitude, you can really envision something great. As you envision it, the ideas come. You’ll run into the right people, you’ll find the right material that you need to learn. Then you just build from there.”