A TRIP TO DENVER TO EXPLORE THE POSSIBILITIES 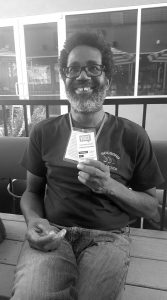 A few weeks ago I took a spontaneous trip to Denver CO by moving van, with a friend of mine. The trip began on a late Sunday afternoon, with a brief stop in Las Vegas, NM to pick up a passenger we had connected with through Craigslist.

On Monday morning I went into the office of Denver Voice and spoke with the staff about vending their paper. I had arrived too late for the mandatory orientation. I returned the second day, filled out forms, watched a video on how the paper had started and how to legally vend the paper on Denver’s streets, etc.

When the orientation was over I was given an identification badge and 10 complementary papers to get started. The orientation video mentioned various tried-and-true locations, including 16th St. Mall. In the four days I worked Downtown I came to understand the value of vending a street paper along with some of the challenges associated with it:

Two Way Street – One Albuquerque Publication 2 – OT Circus: Where the Arts, Occupational Therapy, and a Sense of Home Come Together